skip to main | skip to sidebar

closure, with a side of fries

Wouldn't that be nice? A closure machine? Press a button and it (whatever it may be) doesn't hurt anymore?  Or is that machine already called TV and we can sit and stare and just zone out? No pain. Or do we get our sense of peace somewhere else instead?

I've been studying the problem of 'closure' since 2009. Been wanting to put a stone on my father's grave since he died.  Figuring that maybe, magically and just perhaps, if there's no stone, he's really not down there at all.  He's around the corner, picking up the Sunday NYT.  He's at the Flea Market, chatting with his cronies.  He's in India collecting artifacts. North Africa, being handed manuscripts and swallowing secret others.  He's on some grand adventure, and I'm either out there with him, or, well, not. He's nowhere to be found.

It's all a grand adventure.

But put a stone on a grave, and it's like he just can't escape out the top anymore.  The matzevah is pressing down too hard. The grass is growing 'round it, roots conspire to keep him down. Granite base, bronze plaque.  It reads: 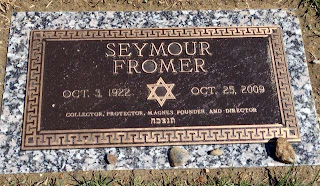 I thought about what to say for all these long years—and now the deed is done.  He's firmly fixed down under there.  It's inescapable.

It wasn't just artifacts and manuscripts that he protected, although that's what he was known for.  No, what he protected most of all was me. Seems more to the point than 'beloved father.'

And she's got closure too. I think she'd like what I finally came up with: 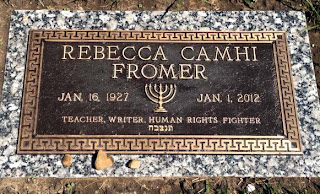 These are the things that made her proud.  Especially the 'fighter' part.  Which is the part I always thought was unnecessary.  But, well, whatever.

The point being—it finally does feel like closure.  It really does.  And she resisted it for so long when she was alive. Or maybe it was her anger he was gone.  She herself had to wait one year as well—but that's expected. Within reason.  He, on the other hand, was stoneless for four years.

I could feel him hovering, exploring, looking out for Judaica in the wee unlikely corners of the world.  He was still out there on the hunt and prowl.  And now, it's strange, he's not.  Closure. He's happily ensconced.  Just wishing that I'd bring him a pastrami sandwich from Saul's, heavy on the deli mustard.

They're in there. They're down there. They're under ground. They're quiet. Too quiet! Here's me. Up here. Still wanting to do them proud. Funny, I think about that now—making them proud—I never did before.  Before. When they were alive, I did as I pleased. Studied what I wanted. Specialized in the not-usness that marks my chosen profession. But well, reprise: whatever. They like what I'm up to now.


Here's the weird thing. With closure, I seem to be able to write again. Though still the words are jerky, stiff and awkward. They don't flow. Watch them stumble across the line, almost embarrassed to take their places inside these clunky sentences.  Oh well. At least it's writing. One word after another. A little rusty, sure. But real live actual words!

Is that what 'closure' does?  Help us stumble on.

We wake up. And stretch. Clean the blech out of our eyes. Check ourselves out: Hmm. No broken bones, although the heart still aches. Is that what closure brings: Return to the land of the doing? Have we learned something yet? Are we a better person?

If so, I mean, well, this is America:  Shouldn't there be a machine (or magic pill) that could do all this mourning for us quick and dirty? Help get us to the lessons of the closure side a helluva lot faster? Skip all that grief and pain, and go directly to 'just carry on'?

Or if no machine or pill has been invented, let's use the BigMac model. After all, we like to eat more than we like to labor.

I'll have my fries dipped in mourning sensitivity, (just not too much). A sprinkle empathy and sympathy, but only just a pinch. Gobble fast, greasy, and most of all, unthinking. Fast food for the bereaved. And then, you know, just let us rest in peace.

oba and oya have it out

I've never talked about Oba, not in public anyway.  More, I whisper about her.  Whisper to her.  Whisper around her. Anything might offend. I try not to think about her too much.  Living with her can be pure hell.  But only sometimes.  Here's the problem:  her self-defeatism, if that is a word.

We had a conversation yesterday, 'conversation' being the polite word for it. She fucking cried, pouted, complained, and blamed (everybody else). Again.

"I'm all alone," she wailed, like I'm not right there next to her, as usual.

She then went on—you know the drill—nobody's helping her. Nobody's supporting her. Where's hers? I've heard this all before. Nobody's giving her a break, how 'bout a grant maybe, a really good job where you don't have to work.  How 'bout free rent? Or no rent at all. How 'bout sex? Where's mine?

She cut off her ear, they say, to feed it to Chango.

You know, I just don't have much sympathy.

Oba could use a really good therapist, as far as I'm concerned.

She counters saying I don't understand her. Don't understand her pain. Her sense of humor. Her struggles. Her ambitions.  How-hard-it-all-is for her in this world.  She's absolutely right. She struggles like mad, and everything's a struggle. 'The world' just isn't taking care of her, and she's furious about that.

She's got to do it herself, and that just pisses her off. And she's sick of people telling her to pull herself up by the bootstraps and do it the fuck herself.

She raises her voice. She yells when she's not being just plain morose. She cut off her ear and fed it to Chango. (I mean, it didn't work too well for van Gogh either as a coping mechanism, but hell, at least he didn't stop painting).

Do you think that kind of behavior makes her more attractive?  Do you think Chango was moved?

I'm not much of a supporter of woe-is-me strategies. I grew up hearing them, and I must say all it did was harden my soul.  Make me want to never ever ask anyone for anything. Not long for anyone. And certainly not pine for them. I have no sense of 'deserving' or 'undeserving'. No sense of entitlement at all.

Expect nothing.
Be ready for anything.
Be prepared.
Maybe I'm a Boy Scout at heart.

It's not like Oba needs to pick up a sword to make her point. Granted, that's not her way.  Just pick herself up. Dust herself off. Hold her head high. And get goddamn to work.

See what she's done?  She's got me the fuck swearing.

Maybe I've got way too much of Weber's Protestant Ethic in me and not enough of Mauss's prestations.  Or maybe I'm too selective in my sense of reciprocal obligations. Maybe I'm just a bitch with a sword. Maybe I'm supposed to fix her tight little universe for her. Find her a Chango and hand it to her on an ebony platter. Cut off my own ears and feed them to her so she can see I'm listening?

A good therapist is what she needs.
Maybe I should give her mine.